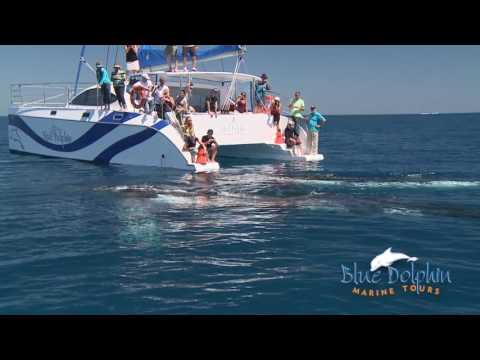 Blue Dolphin motors out for whales every year from July to November, but on Sunday 20th August the family swapped their catamaran for inflatables as they Paddled Out in recognition of National Whale Day.

While skipper Peter Lynch escorted Blue Dolphin through the Great Sandy Straits looking for Hervey Bay’s iconic humpbacks, his children Annika (13) and Matty (11) captained floaties at Scarness Park where they paddled out with hundreds of others to raise awareness of the challenges facing humpback whales in 2017.

Paddle Out For Whales is an annual conservation event held in Hervey Bay, one of the world’s best whale watching destinations. It was founded by Fraser Coast local Vicki Neville – who is also a close friend of the Blue Dolphin family – to highlight the plight of the planet’s whale population as they continue to be routinely hunted in countries such as Iceland, Japan and the Faroe Islands.

Paddle Out participants held their oars upright and released flowers into the ocean during a one minute silence in a moving commemoration of the whales slaughtered in this year’s hunt.

The first Paddle Out event was held seven years ago in 2010 and aims to broadcast an important message in the face of whaling across the world: that Hervey Bay condemns the fate of these gentle giants and that residents are united in their commitment to protect and conserve them.